With this newsletter we offer advance reading of a feature article from the January 2020 issue of New Labor Forum. In it, Harold Meyerson examines the forces that have made California, once a bastion of conservatism, now the bluest state in the union. Cautioning against the facile formulation that demography is destiny, Meyerson suggests demographic trends don’t adequately explain California’s leftward shift. He tells the story of the emergence of a savvy and determined Latinx-labor coalition that transformed the political landscape, enabling the passage of a slew of recent groundbreaking legislation protecting workers, immigrants, and the environment. We provide a summary of that legislation here . We also include an article from City & State New York , discussing the New York State legislature’s yet unsuccessful efforts to keep pace with west coast counterparts by enabling the reclassification of whole groups of gig workers as employees.

Finally, if one person can be credited as the architect of California’s political transformation, Meyerson suggests it was the former Miguel Contreras, son of immigrant farmworkers from Mexico, who in 1996 became the executive secretary-treasurer of the Los Angeles County Federation of Labor. Back in 2002, at the apex of his leadership, New Labor Forum ran an interview by Kent Wong and Ruth Milkman with Miguel Contreras, in which he describes the disarray within organized labor he confronted early on at the fed, and the strategic organizing undertaken that would later lead to a series of remarkable victories for labor, immigrant, and working-class communities. We include that interview here. 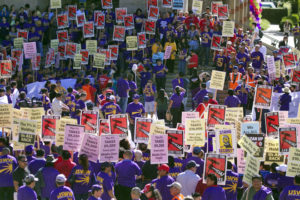 When the news came late last summer that there were now more Democrats than Republicans in California’s Orange County, it clearly didn’t rate as a front-page story. Democrats have been surging and Republicans collapsing in California for the past twenty-plus years, and the extent of that surge, and that collapse, had been made clear in the 2018 midterm elections, when Democratic candidates won four congressional seats in those parts of Orange County (the coast and the southern half) that had been Republican at least . . . 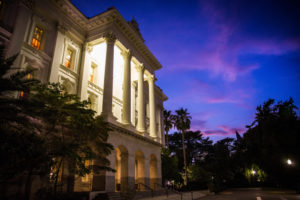 Gavin Newsom began his first year as California governor with surpluses of money in the budget ($21 billion) and Democrats in the Legislature (about 75%), a combination that helped him realize an ambitious agenda to expand public preschool, add a year of tuition-free community college for full-time students, offer health care to young adults who are undocumented, pass a tax to improve 911 emergency service and offer $1 billion in tax rebates to low-income Californians.

Is there any hope for gig workers this session? 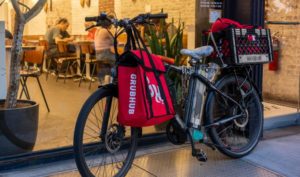 Things don’t always get done in Albany on the first try. Or the second, third or fourth, for that matter. But some are hoping that after a failed start at the end of this past legislative session in June, state lawmakers will be ready to seriously consider updating employment laws for the 21st century. The issue at hand is the classification of independent contractors, as labor organizations fight to have gig economy workers like Uber drivers and Postmates delivery cyclists classified as . . . 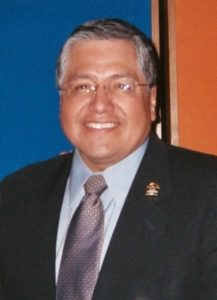 KW: What do you see as the major breakthroughs or contributions over the past five years or so on both the political and organizing fronts from the perspective of the County Fed?

MC: Number one, we’ve been able to get more and more unionists to take organizing seriously. There is nobody in Los Angeles and I don’t think there is anybody across the country who’s saying we shouldn’t organize. But between saying we should organize and doing it is a huge step. We’ve shown locals here how they can do it, and that they’re not alone in doing it. Some key unions have changed, and a few years ago they set up some major efforts to research the corporations they were tackling. The approach is to find out who has the market share of the industry . . .

Do you subscribe to New Labor Forum, our publication for labor and its allies to test and debate new ideas? In this new year, consider giving your favorite friends and colleagues a subscription too. Three times a year scholars, journalists, labor leaders and activists explore topics like the global economy’s impact on work and labor; new union organizing and political strategies; labor’s new constituencies and their relationship to organized labor’s traditional institutions; internal union reform and new structural models for the labor movement; alternative economic and social policies; and the role of culture in a new, revitalized labor movement. It is required reading for anyone who is concerned with issues of work, workers, and social change.  Subscribe now to get each issue of New Labor Forum.