Samir Sonti holds a B.S. in Economics from the Wharton School and a B.A. in Political Science from the University of Pennsylvania. He earned his Ph.D. in History from the University of California, Santa Barbara, with a concentration on 20th century U.S. labor and political economy. He has worked as a political organizer for the Pennsylvania Association of Staff Nurses and Allied Professionals (PASNAP), and as a researcher for UNITE HERE, a union representing hospitality workers in the U.S. and Canada. Prior to arriving at SLU, he served as a special advisor on the presidential campaign of Senator Bernie Sanders. Dr. Sonti is expanding his dissertation, entitled The Price of Prosperity: Inflation and the Limits of the New Deal Order, for publication. Since 2019, he has been the Books and Arts Editor of SLU’s New Labor Forum. He will teach in both the Urban Studies and Labor Studies programs. 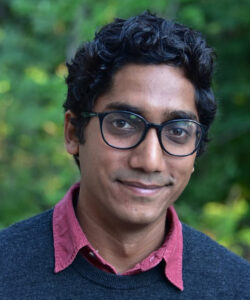 “The Soul of This Place”: Dominique Morisseau’s Detroit, a review by Tyler Grand Pre 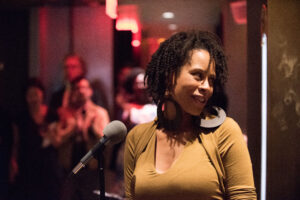 From bop performances in a renowned jazz club and illicit parties hosted in a basement on 12th street, to card games behind the boss’ back in the breakroom of an auto-stamping plant, playwright Dominique Morisseau tells the story of Detroit across three plays that comprise The Detroit Project. Morisseau, the recipient of a MacArthur Genius Grant, describes a social  history of rising “the hell up” while going underground. The trilogy has rightfully been compared to August Wilson’s ten-play Pittsburgh Cycle in the way the plays ambitiously set out to tell the intergenerational story of each playwright’s hometown.

A Ministry for the Present, a review by Matt Hauske and Hilary Strang

The Ministry for the Future
By Kim Stanley Robinson

Some images from the recent present: A video clip of a German woman beside a flood-swollen river through a devastated town saying, “you don’t think of this kind of thing happening here, in Europe.” Twitter posts of a video showing a recent wildfire in Greece blazing through the windows of a passenger ferry,  captioned “what our future looks like” or “like a scene from a disaster movie.” The latest report from the Intergovernmental Panel on Climate Change acknowledging fully for the first time that human activity is the cause of global warming. It may be that the ongoing material reality of climate disaster is at last hitting home for those in Europe and North America, who have had the means to not notice it until now. But this realization is not only belated, it also  remains oddly displaced, imagined as an apocalyptic movie, “our future,” not the lived present. . .

Living on the Job, a review by Laura Adler

Worked Over: How Round-the-Clock Work Is Killing the American Dream
By Jamie K. McCallum

In a now notorious clip from 2004, George W. Bush sits on a stool onstage, next to a white woman around sixty years old with her hair anachronistically styled up. She is worried about changes to Social Security, and Bush notes that she, like many others with these concerns, is “near retirement.” “We are living longer and people are working longer,” Bush remarks, “but nevertheless there’s a certain comfort to know that the promises made will be kept by the government.” She responds, “That’s good because I work three jobs and I feel like I contribute.” Bush looks startled.  “You work three jobs?” She responds firmly, “Three jobs, yes.” He takes a pause and turns smiling to the audience. “Uniquely American innit? I mean that is fantastic that you’re uh, doing that,” he descends into mumbles over tentative applause.

The Low Carbon Good Life, a review by Simon Torracinta

Post-Growth Living: For an Alternative Hedonism
By Kate Soper

The last four years have seen a tremendous surge in energy and unprecedented social movement mobilization around the threat of climate change. In the United States, its main thrust has been the call for a Green New Deal, but similar policy responses are emerging across the world, from the European Union’s Green Deal framework to China’s recent pledge of carbon neutrality before 2060. The bulk of attention in these initiatives is devoted to the decarbonization of the energy sector, and the rapid deployment of renewable technologies like wind and solar. Yet as the British philosopher Kate Soper argues in Post-Growth Living: For An Alternative Hedonism, they largely skirt the politically sensitive issue of consumption. . .

A Chinese Dystopia: Designed in California, a review by Nelson Lichtenstein 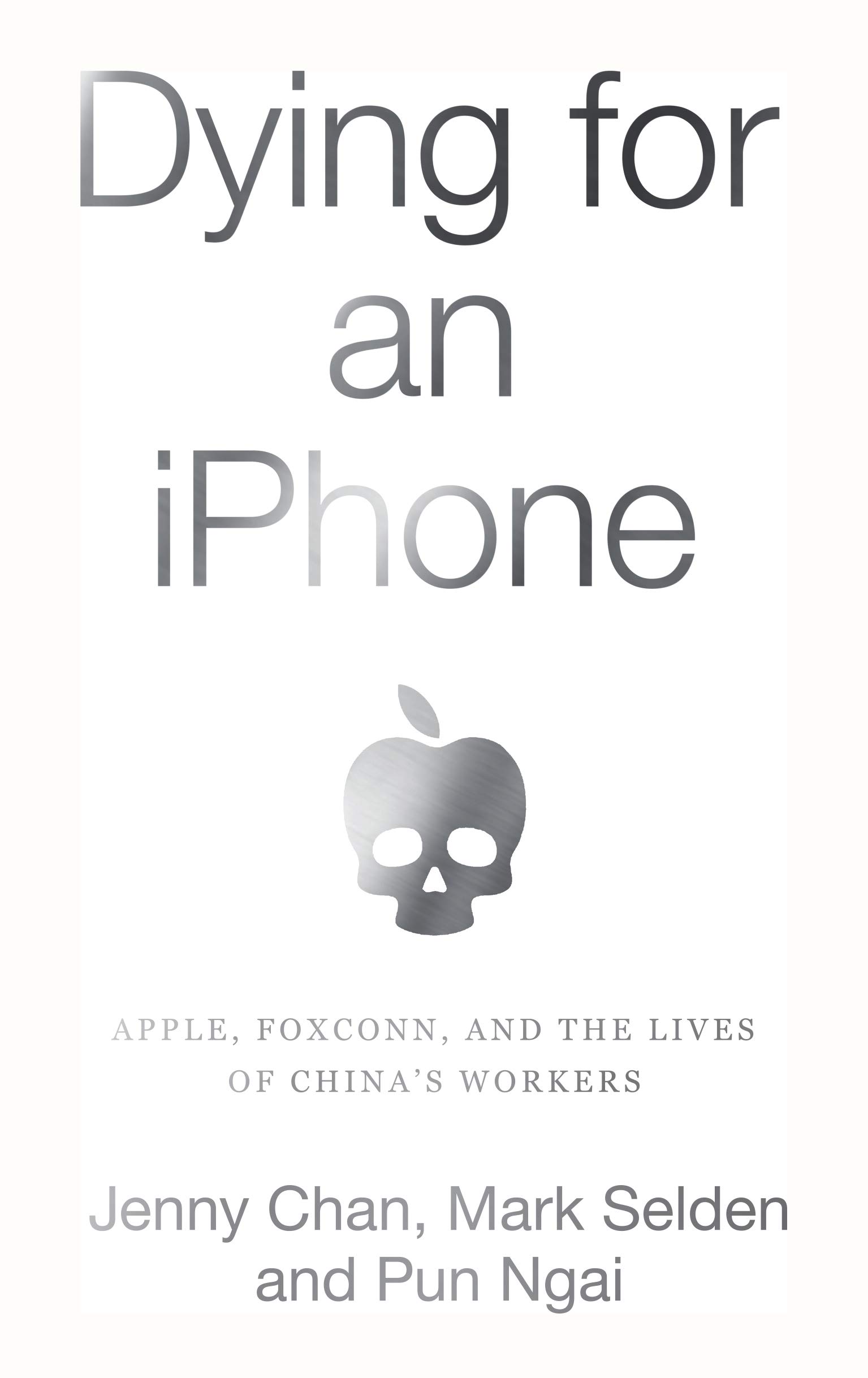 Dying for an iPhone: Apple, Foxconn and the Lives of China’s Workers
By Jenny Chan, Mark Selden, and Pun Ngai

The title of this book is not metaphorical. Between January and November 2010, eighteen Foxconn workers attempted suicide, all but one by leaping from a high floor of their company dormitory. Four survived with injuries.

Five were women and thirteen men, all between the ages of 17 and 25 years. The suicides created an international sensation, both for Foxconn and for Apple, the iconic cell phone and laptop company that has contracted with a host of Chinese suppliers to manufacture a dazzling array of products. Foxconn was by far Apple’s biggest contract manufacturer, and both companies scrambled to stop these tragedies. Foxconn beefed up its mental health outreach, closed off balconies, and erected nets extending outward from lower dormitory floors. Apple called for more inspections and better working conditions, but like . . .

No Future Without Unions, a review by Charles Du 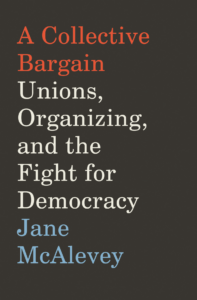 A Collective Bargain: Unions, Organizing, and the Fight for Democracy
By Jane McAlevey

For five years, Christian Smalls worked as a process assistant at an Amazon fulfillment center in Staten Island. After at least two employees at the warehouse tested positive for Covid-19 this past March, he led his coworkers on a walkout to protest unsafe conditions. Amazon fired Smalls the next day for “violating social distancing guidelines and putting the safety of others at risk” and immediately strategized to impugn him—as Amazon’s general counsel put it in notes leaked to the press, he was “not smart or articulate”—and to make him the face of all union organizing efforts at Amazon.

It would not be the only example of astonishingly callous corporate behavior during the early months of the pandemic. Hospitals fired doctors and nurses for speaking out about dangerous shortages of personal protective equipment . . .

Paving the Road to a Socialist Future, a review by Emma Teitelman 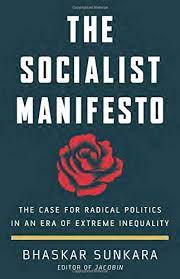 The Socialist Manifesto: The Case for Radical Politics in an Era of Extreme Inequality
By Bhaskar Sunkara

Just one day after Bernie Sanders confirmed his first presidential candidacy in spring 2015, Jacobin posted an essay by its founding editor, Bhaskar Sunkara, who imagined what the Sanders campaign could mean for socialist politics in the United States. Sunkara acknowledged that outsider electoral runs sometimes had the effect of weakening leftist political capacities. With cautious optimism, however, he proposed that if Sanders gained steam, it might present a “sign”: the constant squeeze of the post-recession economy and a steady stream of tepid centrist politicians had, perhaps, created possibilities for a new politics to emerge from the American masses. Electoral victory was unlikely, but Sanders’ run was an opportunity for socialists to “regroup” and articulate a political vision that spoke to the working-class majority. Just as important, Sunkara wrote, the campaign might “begin to legitimate the word ‘socialist’, and spark a conversation around it, even if Sanders’ . . . 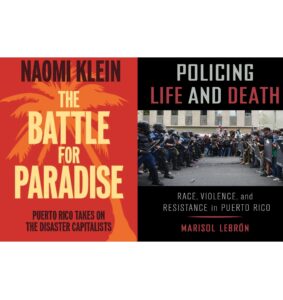 The Battle for Paradise: Puerto Rico Takes on the Disaster Capitalists
By Naomi Klein

In the immediate aftermath of Hurricane Maria, and in the midst of a power outage that left tens of thousands of Puerto Ricans without electricity for months, former Puerto Rican Governor Ricardo Rosselló laid out a plan to rescue the island. It could be described in one word: privatization. The first target would be the Puerto Rican Electric Power Authority (PREPA), which—weakened by years of austerity and mismanagement—had been especially vulnerable to the wrath of Maria. Hundreds of public schools would be closed; hundreds more would be replaced by privately run charter schools. And privatization would not stop there: almost everything was on the table, from highways to national parks. As Puerto Rico’s Secretary of Economic Development and Commerce told The Intercept, “We do expect that similar things will happen in other infrastructure sectors” . . .