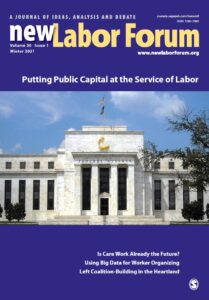 Under the Radar
By Sarah Jaffe
Unreported and under-reported news and views that matter.

Is Care Work Already the Future?
By Andrew Ross

Labor’s Capital: Why and How to Put Capital at the Service of Labor
By Robert C. Hockett

Left Coalition-Building in the Post-Industrial Heartland: A View from Reading and Berks County
By Sharryn Kasmir

Save the News: Campaigning to Preserve Jobs and Democratize Journalism: A conversation with Jon Schleuss
By Kitty Weiss Krupat

Capital Strategies for the Common Good: A Tool for Labor’s Revival
By Patrick Dixon

The Hormel Strike at 35: A Retrospective for Our Times
By Peter Rachleff

Backstage with a Makeup Artist
By Kressent Pottenger

Deregulating the Planet
By Max Fraser

Five Years on, the Paris Climate Agreement Needs an Overhaul
By Sean Sweeney

Geographies of Solidarity
The Southern Key: Class, Race, and Radicalism in the 1930s and 1940s
By Michael Goldfield
Reviewed by Kristoffer Smemo

For the City that Nearly Broke Me

I’m Learning Nothing This Night

Letters to the Editor