Highlights for May 14th 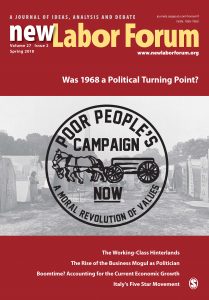 The May 2018 issue of New Labor Forum is out. On the 50th anniversary of Dr. Martin Luther King, Jr.’s assassination, the journal features an article by Reuel Schiller measuring the magnitude of King’s loss in relation to the dissolution of the Poor People’s Movement he helped birth and the subsequent suspension in large-scale, multiracial organizing for economic justice.

Today may mark the beginning of the end of that long hiatus. As we send this newsletter off, The Poor People’s Campaign: A National Call for Moral Revival, launches a nation-wide event including nonviolent moral direct actions in over 30 state capitals, and a series of similar actions that will take place over the next 40 days. This follows two years of meetings in communities throughout the country which led to a report, entitled “The Souls of Poor Folk: Auditing America 50 Years After the Poor People’s Campaign Challenged Racism, Poverty, the War Economy/Militarism and Our National Morality.” Those conversations in turn resulted in a Declaration of Fundamental Rights and Poor People’s Moral Agenda. We include here a profile of the campaign’s co-founder, the Reverend William Barber, by Jelani Cobb in the current issue of The New Yorker, as well as a report on the campaign that ran over NPR earlier this morning.

As the Poor People’s Campaign seeks to end the poverty that plagues approximately 40 million Americans, we would all do well to reassess the War on Poverty, declared by President Lyndon Johnson four years before Martin Luther King, Jr.’s assassination.  In a 2014 article for New Labor Forum, Frances Fox Piven argues that, contrary to accepted wisdom, that the War on Poverty was a largely victorious engagement which mobilized pressure from below reinforced by the Democratic Party’s need to shore up its dwindling political reach in the North, producing a measurable reduction in poverty over the next twenty years. Yet now, Piven notes, not only is poverty back, but the faces of poverty have changed. The most telling difference is that, when Michael Harrington wrote The Other America and Lyndon Johnson took up arms, poverty was thought to afflict people cut off from employment in the mainstream economy, like older people no longer working or those living in Appalachia or the country’s urban ghettos.  Today poverty has become, as it once was back in the 19th century, a function of exploitation at work (not mostly exclusion from work) so that somewhere between 30 and 40 million people make up what we call “the working poor.” And it is this changed nature of poverty that the new Poor People’s Campaign explicitly intends to address.

Mourning King: The Civil Rights Movement and the Fight for Economic Justice

It is impossible to contemplate the fiftieth anniversary of Martin Luther King Jr.’s assassination without hearing a whispered “if only.” King, after all, was murdered just as he sought to expand the Civil Rights Movement’s agenda to include an explicit focus on promoting multiracial economic justice, a cause that has met with little success in the intervening years. If only he had survived, the whispered voice says, he would have transformed the Movement into a force that powerfully and effectively fought for…

By Jelani Cobb/ The New Yorker

At first glance, the crowds of people congregating on a block of Mulberry Street, a stretch of squat brick buildings near downtown Memphis, on the morning of April 4th, might have been there for a variety of reasons. The street venders selling T-shirts and posters and the jumbotron set up near a parking lot suggested the start of a music festival; delegations of men and women dressed in their union best pointed to a labor rally. But the plaintive notes of gospel music drifting from speakers and the black bunting draped over a balcony of the building at the center of the activities indicated a more sombre occasion. The space behind the bunting had begun as an overlook, became a crime scene, and is now a historic site. The hundreds of people, most but by no means all of them black, were gathering at the Lorraine Motel and the National Civil…

Faith leaders are renewing Martin Luther’s King’s effort to demand better jobs and living conditions for the poor, by organizing demonstrations across the country to highlight the issue of poverty.

Listen to the full story here.

The Changing Faces of Poverty and Inequality: How We Once Came to Fight a War on Poverty

The fifty-year anniversary of Lyndon Baines Johnson’s declaration of a war on poverty has sparked a new round of right-wing attacks on social policies for the poor. The arguments are familiar. Ronald Reagan set the tone with the quip “we fought a war on poverty, and poverty won.” Now it was people like Paul Ryan who led the chorus, loudly claiming that despite trillions of dollars spent, and hundreds of programs…

By JustSeeds Artists’ Cooperative
The Poor People’s Campaign: A National Call for Moral Revival Portfolio features a series of twenty-five screenprints by twenty-four artists that express the fundamental principles and core concepts that guide the work of the new Poor People’s Campaign. On December 4, 1967, Rev. Dr. Martin Luther King Jr. announced plans for a Poor People’s Campaign and called for the nation to take dramatic steps to end poverty. In the wake of his assassination the Campaign went forward but fell short of its vision. Fifty years later, a new Poor…

You are cordially invited to the fifth annual Scholarship for Diversity in Labor Awards & Reception introducing the 2018 Scholarship recipients. The event will also have a special guest speaker, Terry Melvin, President of the Coalition of Black Trade Unionists and will honor today’s rising leaders for Labor’s future; Dante Barry, co-founder and Executive Director of Million Hoodies Movement for Justice and Maritza Silva-Farrell, Executive Director of ALIGN. The Joseph S. Murphy Scholarship for Diversity in Labor is dedicated to promoting excellence and diversity in union leadership and in the field of Labor Studies.