Until recently, it has been assumed that among the most highly skilled and best paid soft-ware engineers and technicians, the chances of collective resistance to the labor and other managerial practices of the giants of the industry were virtually nil. However, journalist Julianne Tveten’s article for New Labor Forum’s winter 2019 issue records the growing fight back on the part of precisely these kinds of workers at places like Google and Microsoft. And some recent tech worker efforts have resulted in remarkable victories. Among them, the protest of senior engineers and others at Google that caused the company to end “Project Maven,” its contract with the Defense Department using artificial intelligence to improve the strike precision of the Pentagon’s drones. A distinct feature of this new organizing is the manner in which it combines political and more traditional labor organizing.

Protests against sexual harassment at Google have brought these forms of organizing together to achieve a very recent, notable victory. In Wired, Nitasha Tiku covers the protests’ latest results: the ending of the company’s practice barring workers from initiating class-action suits, or from suing over discrimination or wrongful termination. The widening ideological and political divide between Silicon Valley’s CEOs and its employees has, no doubt, contributed to these advances. Moira Weigel and Ben Tarnoff, writing for The New Republic, note that media outlets have largely failed to take account of tech workers’ growing tendency to eschew the libertarianism prevalent in the corner offices of Silicon Valley for the solidarity of the labor movement. As evidence of this yawning ideological divide, we invite you to view SpeakOut.Tech’s video incitement to tech workers to stand up against their employers, assuring them, “We’ve got your back,” words common in any union hall.

Daniel in the Lion’s Den: Platform Workers Take on the Tech Giants in the Workplace and the World
By Julianne Tveten/ New Labor Forum 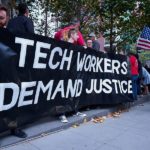 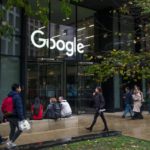 Google said Thursday that it will no longer bar employees from suing the company over discrimination or wrongful termination, or from joining together in class-action suits. The change will end Google’s policy of forcing employees to litigate such disputes in arbitration, where hearings are typically closed and the arbitrators are paid for by the company. Critics say arbitration allows sexual harassers to prey…Read the full article here.

The Stark Political Divide Between Tech CEOs and Their Employees 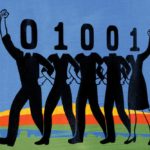 By Moira Weigel and Ben Tarnoff/ The New Republic

Since the 2016 election, politicians and pundits have begun to question the longstanding assumption that the internet is always and everywhere a force for good. But the “tech backlash” has yet to overturn another assumption: that the Californian Ideology still governs the tech industry as a whole. The upper rungs still clearly… Read the full article here. 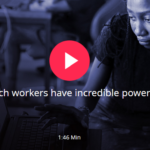 “Technologists have power and can build things used for tremendous good. But when abused, technology can also cause massive harm. Does the product you’re building have the ability to unfairly target communities of color, endanger families seeking asylum, or expose survivors of abuse? We need tech workers to remain vigilant and…”Watch the full video here.