According to a recent report by the Bureau of Labor Statistics, the number of U.S. workers involved in work stoppages in 2018 was at a three-decade high. Not since 1986 had as many workers taken up the most potent tool in labor’s arsenal: the strike weapon. The recent, victorious strike by Stop & Shop workers in New England – achieving wage increases and halting the company’s roll back of health benefits − continues this trend, indicative of heightened solidarity and militancy among workers. This labor fight back may be part of the burgeoning national resistance of all kinds to political and economic elites. It’s likely to have taken some inspiration from the heroic red state teachers’ strikes last year. It may also be an outgrowth of a low unemployment rate emboldening workers to demand more from employers. Whatever the cause, labor seems increasingly prepared to dust off the nearly defunct strike weapon, which New Labor Forum author, Joe Burns, has argued is a sine qua non for rebuilding worker power.

When the labor movement rises again, it will not be the result of improved methods of organizing house calls, the passage of legislation, or one-day publicity strikes. Rather, it will be because the labor movement rediscovered the power of the strike. Not the ineffectual strike of today, but an effective strike grounded in traditional union economics, tactics, and philosophy. For generations…

Another Big Victory for Labor 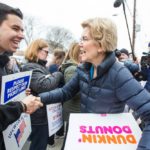 In one of the largest private-sector strikes in recent U.S. history, 31,000 workers had walked off the job at 241 Stop & Shop grocery stores across Massachusetts, Rhode Island, and Connecticut, protesting proposed cuts to their health care, pensions, and overtime pay. On Sunday, the workers received news that, pending a vote, New England’s top grocery store chain had conceded defeat….

By Bureau of Labor Statistics 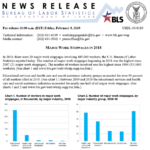