In the current issue of New Labor Forum, columnist Sarah Jaffe covers a very bright spot in the contemporary labor movement: the impressive union organizing taking place at digital media outlets around the country. Beginning in 2010 with Truthout, the first digital newsroom to organize, then since 2015, a wave of unionization has taken place at outlets that include: Gawker, The Onion, The Dodo, Gizmodo Media Group, HuffPost, Mic.com, Thrillist, Mic, Jacobin, Fast Company, The Onion, BuzzFeed, Vox Media, Slate, Salon, the Intercept, MTV News, and the fashion site Refinery29.

Campaigns with the Writers Guild of America, East (WGAE) and NewsGuild-Communications Workers of America (CWA) have been led largely by millenials and, as Steven Greenhouse reports in an article in NiemanLab included here, have focused on raising abysmal starting wages, improving benefits packages, and protecting workers from the precarity that characterizes the industry. And according to TeenVogue columnist Kim Kelly − who figures in Jaffe’s and Greenhouse’s reporting and spoke at a CUNY School of Labor and Urban Studies forum – collective bargaining at these media outlets has also begun to make strides toward improving workplace culture and bringing about “the world we think we want.” New digital media union members continue to experiment with their own feisty and innovative organizing to secure labor contracts. For instance, just last Thursday at Vox Media, approximately 300 workers stayed out of work to pressure the company to settle a contract that’s been in negotiation since April of last year. The dearth of fresh content to post left the company high and dry for the day and seems likely to spur a settlement. 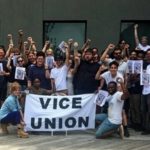 Kim Kelly’s first “real” job—outside of dishwashing, retail sales, and touring with metal bands as a merchandise person—was at Vice Media. Even that started out, she says, as “permalance” rather than full time. Her coworkers reached out to her about their union drive even before she had become a full-time employee and says, she was immediately on board. Two weeks later, they had signed union cards with the Writers Guild of America, East (WGAE), and shortly after..

Why are digital newsrooms unionizing now? “This generation is tired of hearing that this industry requires martyrdom” 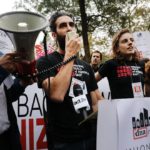 In January 2015, The Washington Post’s labor reporter at the time, Lydia DePillis, wrote a story called “Why Internet journalists don’t organize.” DePillis observed that many writers were individualistic and had “built personal brands” and therefore apparently had scant interest in unions and collective action. One employee she interviewed said digital media workers were “half-looking to jump elsewhere,”…

By The Murphy Institute, CUNY SLU 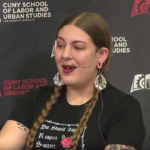 “I’ve been a part of the Vice Union since its very earliest days, when it was more of a whisper than anything we thought we could actually pull off…We got recognized basically immediately and ever since we really haven’t slowed down. At this point, because of the nature of the industry I work in, digital media…I’m one of maybe three or four people left from that original bargaining committee in that original organizing effort. So I’ve kind of turned into Union mom…”

Do you subscribe to New Labor Forum, our publication for labor and its allies to test and debate new ideas?  In this new year, consider giving your favorite friends and colleagues a subscription too. Three times a year scholars, journalists, labor leaders and activists explore topics like the global economy’s impact on work and labor; new union organizing and political strategies; labor’s new constituencies and their relationship to organized labor’s traditional institutions; internal union reform and new structural models for the labor movement; alternative economic and social policies; and the role of culture in a new, revitalized labor movement. It is required reading for anyone who is concerned with issues of work, workers, and social change. Subscribe now to get each print issue of New Labor Forum.