Surveillance capitalism has opened up a whole new era in capital accumulation, the developments of which New Labor Forum continues to examine. Relying on a process of primitive accumulation which has always been characteristic of capitalism, surveillance capitalism extends capital’s reach beyond nature and human labor into the interior, intimate life of human beings, by tracking, manipulating, and trading in human behavior. In the current issue of the journal, Evan Malmgren surveys this twenty-first century data merchandising and behavioral manipulation and assesses the burgeoning efforts by individuals and organizations to tame, if not exactly overturn, this new brand of capitalism.

And, as advance reading for newsletter subscribers, we also offer Max Fraser’s January 2020 column “Organized Money: What is Corporate America Thinking?”, which tracks recent dramatic increases in political spending, including a marked surge in contributions to Republicans, by the pioneers of surveillance capitalism. Big Tech lobbying and campaign contributions, especially by the “Big Four” — Google, Amazon, Facebook, Apple — have catapulted to fend off a spate of government inquiries, record-setting fines, and mounting worker protest, including petitions, walk-outs, and union organizing drives. Fraser suggests that a primary concern of Big Tech has been to prevent the proliferation of California-esque legislation – epitomized by the state’s Consumer Privacy Act of 2018 and its new law requiring gig-economy workers to be regarded as employees rather than independent contractors. And as the battle between surveillance capitalism and its growing legion of detractors rages on, we’ll continue to cover it.

Resisting “Big Other”: What Will It Take to Defeat Surveillance Capitalism?
by Evan Malmgren / New Labor Forum 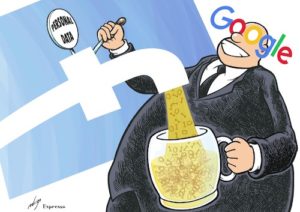 The past few years have ushered in a sea change in public perception of the tech industry. While Silicon Valley was once cherished by progressives for its social liberalism and championed by conservatives for its ruthless ingenuity, its luminaries are now under assault from all sides. On the left, figures like Elizabeth Warren are revitalizing the language of antitrust; on the right, pundits and politicians are up in arms over supposed biases in mass communication channels, and across the board, people are scrambling to protect their privacy and personal information from the likes of Facebook and Cambridge Analytica. The fears animating this backlash often center on the ills of private- sector surveillance, with the language of privacy rights and personal data collection entering mainstream conversations about civil liberties.

When Republican Senator Josh Hawley of Missouri announced via Twitter on September 9, 2019 that it was going to be “a very bad day for Google,” he was not kidding. Later that sunny Monday afternoon, attorneys general from fifty states and territories convened a dramatic press conference on the steps of the U.S. Supreme Court, to let it be known they were beginning a coordinated investigation into anti- competitive practices in Google’s digital advertising operations. Of course, it was only the latest such probe into the tech behemoth, which was already facing separate investigations by the Justice Department and the House Judiciary Committee. 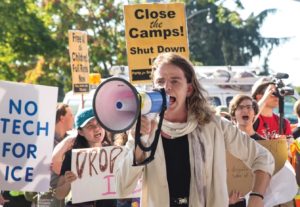 On September 13 more than a hundred activists participated in a bicoastal protest at Palantir’s two headquarters, in New York City and in Palo Alto, California. The intent of the protest was to bring awareness to the tech company’s involvement with Immigration and Customs Enforcement (ICE), which Palantir provides with data-mining software that’s been used to screen undocumented immigrants and plan raids. 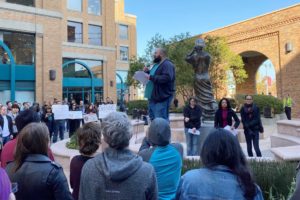 SAN FRANCISCO — Google on Monday fired four employees who had been active in labor organizing at the company, according to a memo that was seen by The New York Times. The memo, sent by Google’s security and investigations team, told employees that the company had dismissed four employees “for clear and repeated violations of our data security policies.”

Do you subscribe to New Labor Forum, our publication for labor and its allies to test and debate new ideas? In this new year, consider giving your favorite friends and colleagues a subscription too. Three times a year scholars, journalists, labor leaders and activists explore topics like the global economy’s impact on work and labor; new union organizing and political strategies; labor’s new constituencies and their relationship to organized labor’s traditional institutions; internal union reform and new structural models for the labor movement; alternative economic and social policies; and the role of culture in a new, revitalized labor movement. It is required reading for anyone who is concerned with issues of work, workers, and social change.  Subscribe now to get each issue of New Labor Forum.