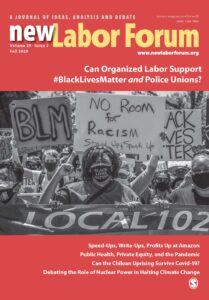 Under the Radar
By Sarah Jaffe

On the Contrary: Two Views on Nuclear Power

The Importance of Nuclear Power in Our Energy Mix
By Gary S. Was and Todd R. Allen

Nuclear Energy Is Not a Climate Solution: Response to Gary S. Was and Todd R. Allen
By Todd Larsen

Which Side Are We On: Can Labor Support #BlackLivesMatter and Police Unions?
By David Unger

Courage in the Time of Covid-19: Amazon Warehouse, May Day 2020
Photo essay by David Bacon

Can the Chilean Uprising Survive the Pandemic?
By René Rojas

The Red for Ed Movement, Two Years In
By Eric Blanc

The Professional Middle Class: Workers and Not Workers at All
By Jack Metzgar

Moneybags for Billionaires, Body Bags for Workers: Organizing in the Time of Pandemics
By Sheri Davis-Faulkner and Marilyn Sneiderman

In a Covid-19 World, Can Hotel Workers Keep Their Gains?
By David Bacon

Speed-Ups, Write-Ups, Profits Up at Amazon
By Kressent Pottenger

Public Health, Private Equity, and the Pandemic
By Max Fraser

There May Be No Choice but to Nationalize Oil and Gas—and Renewables, Too
By Sean Sweeney

No Future without Unions
A Collective Bargain: Unions, Organizing, and the Fight for Democracy
By Jane McAlevey
Reviewed by Charles Du

An Argument for Universalism
Toward Freedom: The Case against Race Reductionism
By Touré F. Reed
Reviewed by Roger Lancaster

Organizing at Deliveroo
Riding for Deliveroo: Resistance in the New Economy
By Callum Cant
Reviewed by Robert Ovetz