Ten years ago on a bright fall day, crowds began to mass in lower Manhattan at capitalism’s doorstep. The budding movement, quickly referred to as Occupy Wall Street, trained its sights on a corporate oligarchy that had so often remained obscured in U.S. movements for social change. Not this time. The makeshift Occupy banners broadcast an uprising that held capitalism itself in its crosshairs: “Foreclose on Banks, Not on People”, “Where’s Robin Hood When We Need Him?”, “Bailout the People”, and of course, “We are the 99%”.
On the tenth anniversary of Occupy Wall Street, we join in current efforts to reconsider the movement and assess its long-term impacts, particularly the extent and nature of cross fertilization between Occupy activists and activists based inside the labor movement. In this regard, we offer an article written just six months into Occupy by Penny Lewis and Stephanie Luce for New Labor Forum. We pair that with a recent piece by Doug Singsen for Jacobin, under the title, Labor Unions Were Occupy Wall Street’s Key, Forgotten, Conflicted Ally. And we end with the latest episode of our Reinventing Solidarity podcast, in which Stephanie Luce interviews four original Occupy activists who have taken what they learned then into contemporary social justice work ranging from electoral politics to racial justice and union organizing.

Labor and Occupy Wall Street: An Appraisal of the First Six Months

The Occupy movement is a labor movement, in the broadest sense. Inequality and the relationship of wealth to power are among its key concerns. The direct actions and democratic practices of Occupy Wall Street (OWS), and the hundreds of Occupations that have grown in its wake, confront the prerogatives of those who amass wealth, land, and influence . . .

Ten years since the sudden rise of the Occupy movement, its impact on the contemporary left has been dissected many times over. One aspect of Occupy that is frequently overlooked, however, is its relationship to the labor movement. Unions were essential to the initial survival and growth of Occupy Wall Street, although the two of them never managed to connect with each other as fully as they should . . . 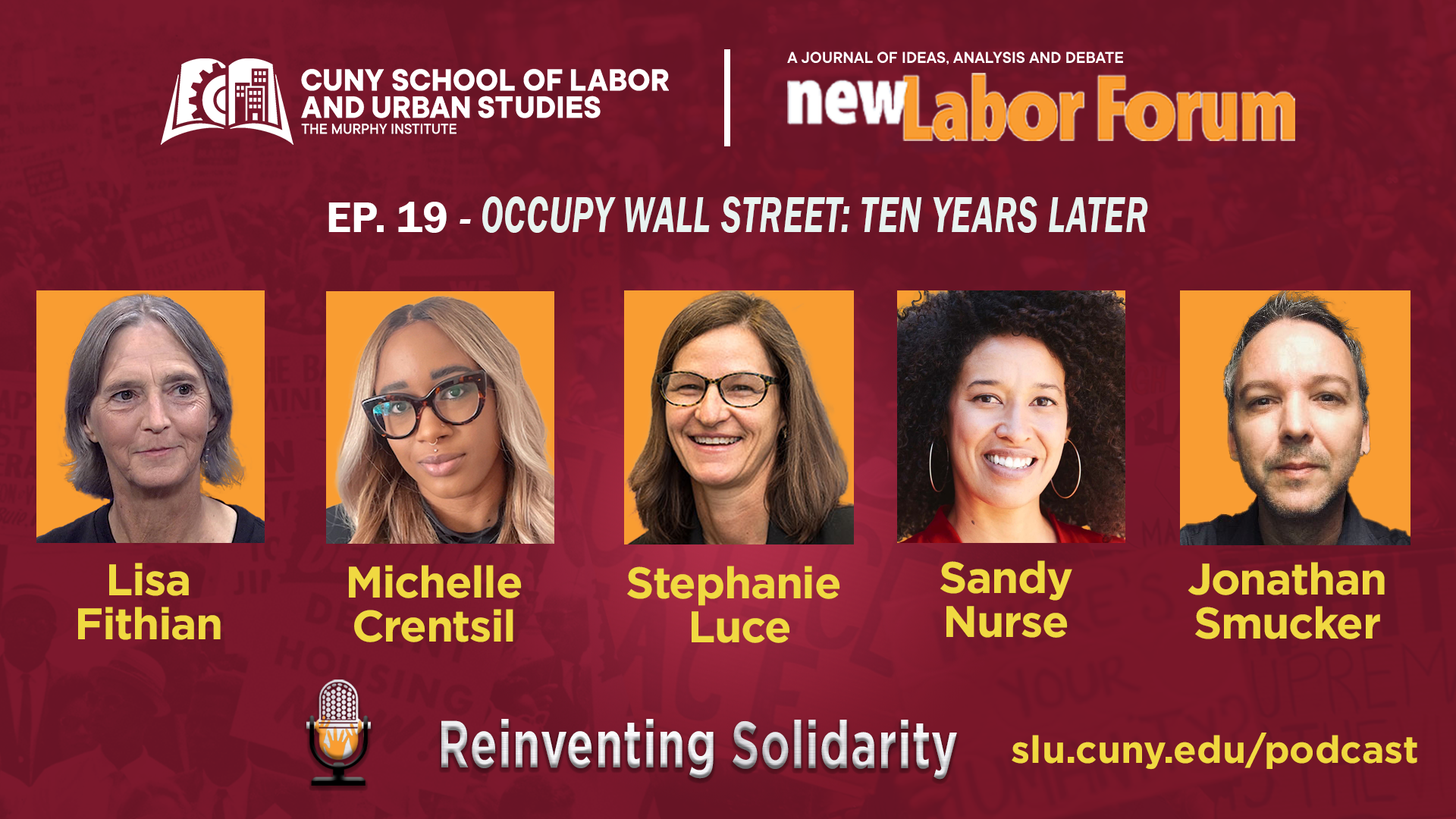 On September 17th, 2011, approximately a thousand people massed in lower Manhattan at the towering edifices of the “Vatican of capitalism.” This movement, known as Occupy Wall Street, called attention to the obscene inequality and devastation of 21st century capitalism on full display in the wake of the fiscal meltdown. Already by that October, in cities around the world, millions had occupied their own symbolic Wall Streets. Although the encampment in Zuccotti Park was relatively short lived, many have argued that this protest movement changed the language and perhaps the focus of our politics, making “the 99%” part of the lingua franca. On the tenth anniversary of Occupy, this episode offers an assessment of the movement’s long-term impact according to four Occupy activists.
Listen here: SLU.CUNY.EDU/PODCAST