On this Labor Day we celebrate a nation-wide upsurge of worker-led organizing victories and invite you to join us this fall at events exploring those successes and gauging their future prospects. Along these lines, several articles in New Labor Forum’s fall issue, due out soon, describe and assess organizing strategy as it continues to develop at Amazon and Starbucks.
Today we also mark the end of a summer that broke daily temperature records in more than 1,200 locales around the globe. Some of those hotspots were in China, the world’s second largest economy, where government officials are warning of a “severe threat” to the fall harvest; and to induce rain, they have turned to seeding the clouds. And in Texas’ Dinosaur Valley State Park, the same extreme heat and lack of rainfall dried the Paluxy River enough to reveal a set of 113-million-year-old footprints left by a seven-ton Acrocanthosaurus that inhabited the area southwest of present-day Fort Worth. With this newsletter, we offer a podcast interview that discusses the global policy failures that continue to make the 2015 Paris agreement a tragic hallmark of missed targets. Speaking with journalist Laura Flanders, New Labor Forum columnist Sean Sweeney explains why policies that depend upon private investment in renewables still only manage to produce a small fraction of the world’s energy. People in the Global South confront not only this dearth of investment in sustainable energy, but also widespread lack of access to any kind of energy. In a recent article for New Labor Forum, Sweeney provides some answers to the question raised by the need to end energy poverty in the Global South while simultaneously reducing greenhouse gas emissions to fight climate change.

Leaping Backwards: Why is Energy Poverty Rising in Africa? 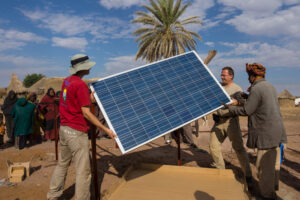 How can the world end energy poverty in the Global South and simultaneously reduce greenhouse gas emissions to fight climate change? In 2021, 860 million people had no access to electricity. Today, a third of all humanity lacks access to reliable power. Roughly 2.6 billion people heat their homes with polluting fuels and technologies, and using traditional stoves fueled by charcoal, coal, crop waste, dung, kerosene, and wood. The majority of families in the Global South are today able to turn on an electric light—and therefore have “access to electricity” for at least some hours in the day—but for many that is as far as it goes. For other basic needs, dirty and perhaps life-threatening energy continues to be the norm . . . 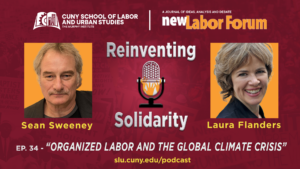 Sean Sweeney, Director of SLU’s Trade Unions for Energy Democracy, speaks with journalist Laura Flanders about continued botched efforts by countries around the globe to meet the targets set forth in 2015 Paris Agreement. Pointing to worldwide policies that depend upon private investment, he describes why the profit motive has failed to deliver renewable energy at scale, affordably, or with the urgency demanded by the climate crisis. Much more promising, he suggests, is the Global Public Goods approach increasingly advanced by international unions and their allies.