CUNY School of Labor and Urban Studies faculty Ruth Milkman and Stephanie Luce have released their annual report on the status of unions in New York City, New York State, and the nation. The report shows unionization levels holding fairly steady during the past year, though Milkman and Luce note that the near-term prospects for organized labor seem much more dubious.  As a result of the Supreme Court’s Janus v. AFSCME decision in June 2018, public sector workers are now no longer obliged to pay “fair share” fees to the unions that continue to bargain on their behalf. Though a number of states, including New York, have passed legislation to prevent the hemorrhaging public sector union membership, some degree of decline in the public sector union rolls is all but certain, with disparate results nationally. And the decades-long decline in union membership from its peak of 35.4% in 1945 to 10 % today shows little indication of reversal, despite the fact that a plurality of Americans view unions favorably.

A public forum to be held at the CUNY School of Labor and Urban Studies on October 12th will examine these opposing trends: the weakening of the U.S. labor movement and its broad achievements for all workers, and, at the same time, evidence of an appetite for worker resistance and organizing, as seen in the teacher walkouts in West Virginia, Kentucky, Oklahoma, and Arizona earlier this year, and an upsurge in unionization among workers under 35 years old in 2017. Please join us as speakers discuss what this implies about the possibilities and struggles ahead for labor, and which strategic options might enable organized labor to succeed at mass organizing and to join forces with racial and economic justice organizations to become a movement.

Along these lines, we include a think piece titled Invest, Democratize, Organize: Lessons on building more equitable cities from Nashville and Raleigh-Durham, by The Partnership for Working Families, whose Executive Director, Lauren Jacobs, will speak at our forum on October 12th.

The State of the Unions Report: A Profile of Organized Labor in New York City, New York State and the United States

Organized labor in the United States has suffered sharp decline in numbers and influence in recent years. In addition to the challenges of the prolonged recovery from the Great Recession, anti-union groups have launched aggressive attacks on public-sector collective bargaining rights. Their most important  achievement to date was the U.S. Supreme Court June 2018 decision in the Janus v. AFSCME case, which prohibits public-sector unions from collecting “fair share” or “agency” fees from non-members, although the extent of its impact is not yet clear. In the private sector, where the national unionization rate has fallen to record lows, rising health care costs and ongoing employer demands for concessions have made it difficult for many unions to win improvements in wages and benefits, especially since the financial crisis of 2007-08. Inequality in income and wealth has continued to skyrocket, reaching levels not seen since the early twentieth century…

By CUNY School of Labor and Urban Studies 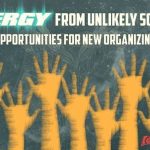 For more than a quarter century, workers and the U.S. labor movement have sustained significant setbacks, including the broad expansion of “right-to-work” conditions; the increasing use by employers of vehicles that enable them to shirk standard employer responsibilities; and the Supreme Court’s tendency to prioritize employers’ property rights over worker rights. Despite these trends, 61 percent of Americans view unions favorably..

By The Partnership for Working Families

After decades of disinvestment and the Great Recession, cities are making a comeback, especially in the growing and sprawling cities in the Southern U.S. However, without concerted and meaningful intervention from organizers, advocates, and elected leaders, the “business as usual” practices deployed by many developers and corporations will continue to have a negative impact on the most vulnerable communities. To build real power and victories for working people of color and immigrants, the Partnership’s approach focuses on supporting and driving comprehensive trans-local campaigns to transform institutions, such as government, universities and corporations, that have…