With this installment of New Labor Forum Highlights, we offer two important articles from the current issue of the journal, as well as two poems you won’t want to miss.

We’ve all heard Donald Trump denounce the “deep state”, yet seen him people his administration with generals, CIA mandarins, and hedge fund operators. An article here by Jacob Silverman probes the origins of the “deep state” in the National Security Act of 1947, chronicles its imperial mission abroad, and maps the division of labor between its foreign and domestic policy apparatchiks. Silverman’s tracking of these mainly unelected centers of power should put to rest the tendency to see in these deep state institutions, long the bete noire of the left, a guarantor of civil liberties.

And first among countries able to count on the support of the “deep state” is, of course, Israel, despite that nation’s sustained human rights violations against the people who once inhabited the land it controls. An article by Andrew Ross tallies the immense labor contribution of Palestinians, particularly through their ongoing construction work to erect and expand the superstructure of Israel. Given not only the role of Palestinian labor in building the Israeli state, but also the fact that it’s been a compulsory and hyper-exploited labor force, Ross finds a strong case for labor-based reparations to Palestinians. Ross proposes that Palestinian labor contributions ought to provide a rationale for full citizenship rights, and perhaps other claims as well, should a multi-cultural integrated Israeli state ultimately emerge.

And we conclude with the work of Palestinian poet, Mahmoud Darwish (1942-2008), and of American Jewish poet, Elana Bell. Darwish’s Identity Card became a protest anthem in the 1960s, triggering the Israeli government to place him under house arrest.  And Elana Bell, granddaughter of Holocaust survivors, comes to grips with a land that is both a Zionist dream and an occupied state. Her poem, “There are things this poem would rather not say” bears witness to the labor debt Israelis owe the Palestinian people. 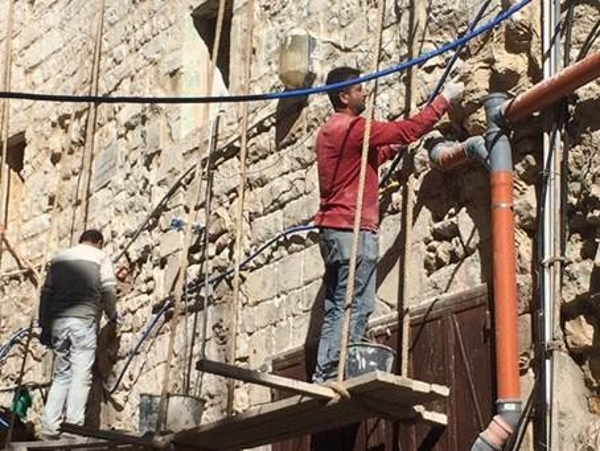 Is There a Deep State, and If So What Is It?
By Jacob Silverman, New Labor Forum

At 3:54 a.m. on May 23, 2018, President Donald Trump took to his favorite medium to do one of the things  he does best: complain about his many enemies in bloviating, histrionic terms. “Look how things have turned around on the Criminal Deep State,” he tweeted, going on to complain about the presence of an FBI informant in his campaign.  “They go after Phony Collusion with Russia, a made up Scam, and end up getting caught in a major SPY scandal the likes of which this country may never have seen before! What goes around, comes around!” Despite his profligate posting, Trump does not speak much of the Deep State (he has used the term in five tweets since becoming president), but it has become the favored boogeyman of those around him….

Who built Israel? The pioneers, of course. Men and women unaccustomed to skilled manual labor, who staffed the cement mixers, with shovels in hand or bricks balanced awkwardly on their shoulders, and who made “New Jews” of themselves through their nation-making toil. At least this was the dogma of much-lionized Labor Zionists (Ber Borochov, A. D. Gordon, Yosef Brenner, David Ben-Gurion, Golda Meir, and Berl Katznelson) who promoted this hard graft as a rite of passage and a requirement for redeeming another people’s land as their own…

Write down!
I am an Arab
And my identity card number is fifty thousand
I have eight children
And the ninth will come after a summer
Will you be angry?

Write down!
I am an Arab
Employed with fellow workers at a quarry
I have eight children
I get them bread
Garments and books
from the rocks..
I do not supplicate charity at your doors
Nor do I belittle myself at the footsteps of your chamber
So will you be angry?…

We ate labneh and bread in your tents

When we had no water

we drew it from your well

Your camels carried the sand to build our houses

You were the wasteland we made bloom.

Do you subscribe to New Labor Forum, our publication for labor and its allies to test and debate new ideas?  In this new year, consider giving your favorite friends and colleagues a subscription too. Three times a year scholars, journalists, labor leaders and activists explore topics like the global economy’s impact on work and labor; new union organizing and political strategies; labor’s new constituencies and their relationship to organized labor’s traditional institutions; internal union reform and new structural models for the labor movement; alternative economic and social policies; and the role of culture in a new, revitalized labor movement. It is required reading for anyone who is concerned with issues of work, workers, and social change. Subscribe now to get each issue of New Labor Forum