With this installment of the New Labor Forum newsletter, we take a break from our bi-weekly offering of free articles, reports, videos, and poems. This holiday season, we ask you to support the journal by taking out a gift subscription now for a friend and subscribe or re-up yourself for 2019! This month, subscribers will also receive a free back issue of New Labor Forum from 2018.

The journal has a long and proud history of publishing the work of cutting-edge labor activists, first-rate scholars, and journalists who debate and discuss the full range of issues confronting workers and working-class communities. Highlights from the January 2019 issue provide manifest proof of that:

Shoshana Zuboff’s Surveillance Capitalism and the Challenge of Collective Action, will present an extended essay summation of her forthcoming book, The Age of Surveillance Capitalism: The Fight for a Human Future at the New Frontier of Power. Zuboff theorizes how surveillance capitalism opens up a whole new era in capital accumulation.  Relying on a process of primitive accumulation, which has always been characteristic of capitalism, it extends capital’s reach beyond nature and human labor into the interior, intimate life of human beings, by tracking, manipulating, and trading in human behavior.  She calls the new system the “Big Other” and ponders what new forms of collective resistance might emerge to challenge the dominion of surveillance capitalism. 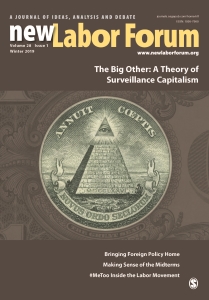 In Renewing Working-Class Internationalism, Aziz Rana will reckon with the fact that, for some time now, the new left as a whole, pre-occupied with domestic political issues, has failed to offer an alternative vision of a left foreign policy.  His article will suggest what a left foreign policy should entail, urging progressives to break through the artificial division between domestic and foreign affairs, arguing − as did social democrats of yesteryear − that the dominion of capital at home depends on its political and economic over-lordship throughout the rest of the world.

Ted Fertik will offer provocative answers to the question What Did the Midterms Tell Us About the Future of the Electoral Left?  Presenting an anatomy of the left’s electoral coalition,  he’ll take a stab at assessing the prospects for “multiracial left populism.”

And in Sex Work Is Work, Riley Renegade, a sex worker and organizer, will pan the trepidation of feminists and labor organizers to accept this form of labor that far predates capitalism.  She describes both the harmfully exploitative and the rewarding nature of work in her segment of this multi-billion dollar industry.

For more information about New Labor Forum and this offer, please contact newlabor@slu.cuny.edu