In this holiday season, if you’ve resisted online shopping through Amazon, you’re in the diminishing minority. More than half of all online retail searches presently begin with Amazon, and the company now takes in fully half of all web-based consumer purchases made in the United States. It therefore behooves us to reckon with the behemoth’s gravitational pull on our economy, and indeed on the global economy. An impressive report by the Institute for Local Self-Reliance (ILSR), included in this newsletter, goes a long way toward measuring Amazon’s impact on local economies in the form of shuttered businesses, net job losses, low wages for its warehouse workers, and many millions of dollars of lost tax revenue owing to Amazon’s successful tax avoidance schemes.

As evidenced in the following news articles, Amazon’s global workforce is increasingly refusing to take it on the chin. Its workers in Europe and the U.S. are engaging in traditional labor organizing, as well as organizing intended to protest the company’s business model and its inroads into dubious ventures, as in the development of facial recognition technology for law enforcement. In 2019, New Labor Forum will be publishing a number of articles that examine the ways in which Amazon and other Silicon Valley giants have altered the functioning of capitalism in the twenty-first century, thereby presenting new challenges and opportunities for worker and political organizing. So, if you haven’t already subscribed, please do so now and see below for a special holiday gift.

For all of its reach, Amazon, the company founded by Jeff Bezos in 1995 as an online bookstore, is still remarkably invisible. It makes it easy not to notice how  powerful and wide-ranging it has become. But behind the packages on the doorstep, and behind the inviting interface and seamless service that has  consistently put the company at the top of corporate reputation rankings, Amazon has quietly positioned itself at the center of a growing share of our daily activities and transactions, extending its tentacles across our  economy, and with it, our lives…

If local headlines are to be believed, not much happens in Shakopee. But on Friday evening, this placid town of 40,000 on the outskirts of Minnesota’s Twin Cities became the epicenter of the fight for humane working conditions at one of the world’s most valuable companies. For the last two years, Amazon has quietly expanded its presence in the suburb, and worker resentment towards conditions there has grown with it, culminating in today’s protest outside fulfillment center MSP1—a sprawling 850,000-square-foot structure abutting a heavy industrial zone—attended by local activists and joined by Amazon workers ending their shifts. It ended with approximately 250 people marching on the building’s main entrance…

German trade union Verdi called on workers at two Amazon logistic centers to strike on Monday, part of a long-running campaign for better pay and conditions. Verdi has organized frequent strikes at Amazon in Germany since 2013 to press demands for the retailer to raise pay for warehouse workers in accordance with collective bargaining agreements in Germany’s mail order and retail industry… 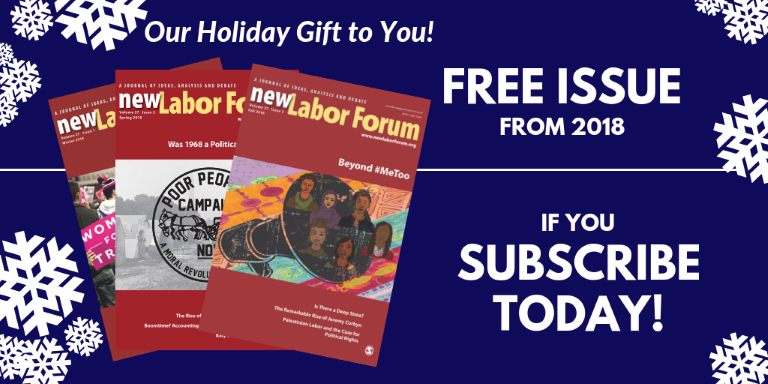 Subscribe to New Labor Forum
Do you subscribe to New Labor Forum, our publication that enables labor and its allies to test and debate new ideas?  In this new year, consider giving your favorite friends and colleagues a subscription too. Three times a year scholars, journalists, labor leaders and activists explore topics like the global economy’s impact on work and labor; new union organizing and political strategies; labor’s new constituencies and their relationship to organized labor’s traditional institutions; internal union reform and new structural models for the labor movement; alternative economic and social policies; and the role of culture in a new, revitalized labor movement. It is required reading for anyone who is concerned with issues of work, workers, and social change. Subscribe now to get each issue of New Labor Forum.
Photo credit: Institute for Local Self-Reliance analysis, drawing on Amazon’s annual reports, U.S. Census data, and data disclosed by Amazon on its website, available at “Economic Impact — About Amazon,” Amazon, accessed May 2016.