In his “Earth to Labor” column for New Labor Forum, Sean Sweeney detects a growing awareness that market-driven forces have failed to deliver the scale of energy transition necessary to sustain life on this planet. This reality, plus the example of the vital role of state action in combatting the COVID-19 pandemic, have sparked worldwide calls for a “Global Public Goods” approach to climate change. In his column and in his CUNY T.V. interview with Laura Flanders, Sweeney lays out the case for why this approach offers the greatest promise for tackling climate change. 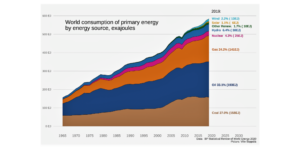 Covid-19 has provided a stark reminder that today’s world is both scarred by grotesque levels of inequality and populated by billions of vulnerable people. However, it has also stimulated renewed interest in “global public goods” (GPGs) and how this foundational idea might be utilized to address a range of social crises, including climate change . . .

Sean Sweeney Interview with Laura Flanders City Works, CUNY TV
In this segment of City Works, host Laura Flanders speaks with the director of CUNY SLU’s International Program for Labor, Climate and Environment, Sean Sweeney, who attended the 2021 United Nations Climate Change Conference (COP26) and has worked with labor on strategies for a transition to sustainable, democratically controlled energy production. 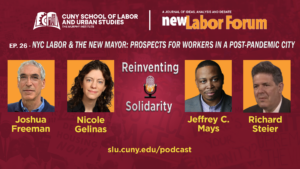 Less than a month into the new mayoralty in the City of New York, we assembled a panel of leading journalists to delineate Eric Adams’s vision for the city, especially as it pertains to working people. Only the second black mayor in the city’s history, Adams was also the son of a housekeeper, a graduate of the public schools, and for two decades the member of a municipal union. Our host, historian and emeritus faculty member Josh Freeman, asked the assembled reporters whether these facts are likely to impact the administration’s approach to municipal labor relations, and more broadly, to governing one of the most deeply unequal cities in the nation. 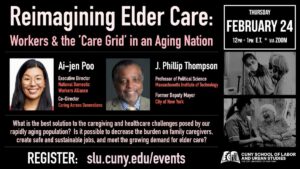